Recently, I’ve been thinking a lot about the Birds of Prey tie-in comic that never was (check out art from that abandoned effort here) and about the other DC shows that have been given the comic treatment; Smallville, Arrow, Flash, Batman ’66, Wonder Woman ’77 to name a few. With so much attention on DC Comics at the moment and all the comic reboots of old shows and universes, I thought it would be awesome to see what a Birds of Prey revival comic would look like now.  So, I found an awesome artist, Ben Cloutier, and commissioned him to come up with a comic cover for our beloved Birds. Happy to report, the results are pretty awesome!

Added the DC Comics and WB logo for fun, but of course they have no affiliation with this project.  This is just me fanboying out on what could be. Ben’s art is absolutely stellar and captures the characters in front of their Clocktower base, ready for another night out, defending their city. I would love to write a few short stories for a comic in the future, but that’s not in the budget at the moment.  For now, I love looking at Ben’s art mocked up into a sort of “What Could Be” comic cover. Please check out Ben’s DeviantArt page where he posts his work and takes commissions at a VERY reasonable price, especially considering his talent.  And if you happen to know someone at DC, you tell them I’ve got a great idea ready to go! 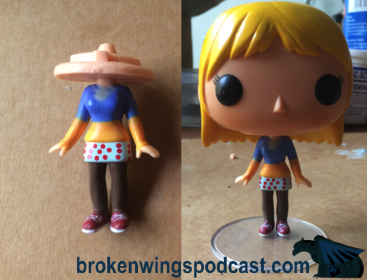 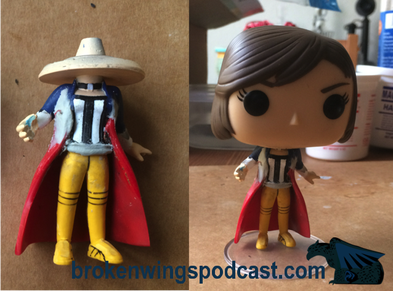 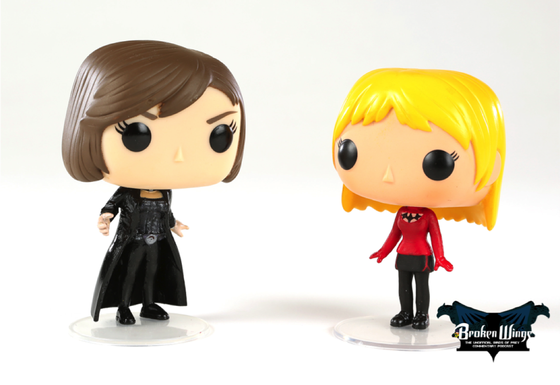 So, I’ve been starting to investigate a few BOP-related artsy projects but to tackle one of them, I have to finally face a question about the show’s finale that has plagued me for 12 years now: What the hell is Harley Quinn wearing?! I’m completely serious.  Maybe the answers are super-easy and obvious to everyone else out there, but for me they are a baffling, enigmatic mystery.  Throughout the series, Harley has some pretty flamboyant, verging-on-runway outfits (though, so does Helena), but for our purposes I am focusing specifically on her “I’m Taking Over The Clocktower Tonight” outfit from the end of “Devil’s Eyes.”  Here, she is finally out to the Birds as the “evil, pyscho bitch” that we’ve always known she was, and taken control of home base in an outfit that was originally written to be the character’s classic jester unitard, but become more homage than anything. I don’t dislike the costume AT ALL as a practical interpretation of the character. In fact, I quite like the look and have drawn it more than a few times on my Harley Quinn sketches throughout the years. I am however, at the same time, completely baffled by the wardrobe and simply want to know what is going on! Let’s break the costume down a bit… This I don’t really have questions about (accept one, which we’ll get to later). Obviously, this is some kind of tight, red turtleneck that has been modified by the costume department to feature an open front with the character’s trademark three diamonds from the comics.  Pair that with the red leather gloves, and things are off to a reasonable, distinguishable start. 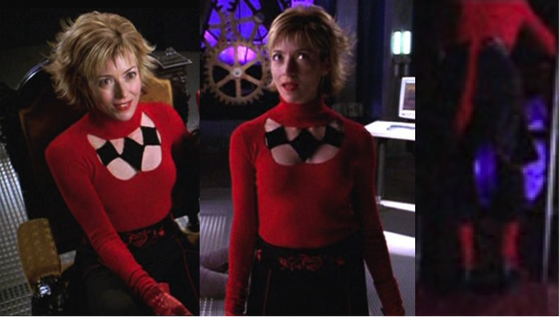 Here is where things get a little tricky though. As the gateway drug to the rest of the costume, this wide, leather (?) belt has a red design on the band and a long red sash that hangs off the back. I’ve never been able to make out the design well, but best guess is some sort of flower design. The red sash on the back also brings along some questions as it may or may not be attached to the top somehow as well. Again, I have NO idea! 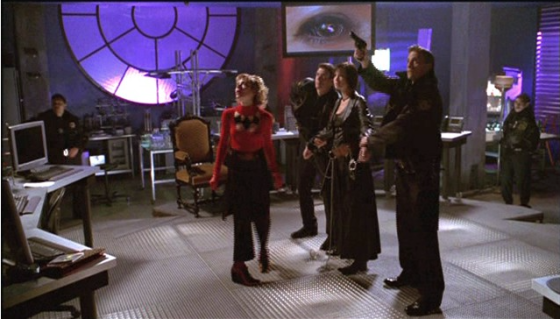 So, I’ve been told that a skirt-over-pants was somewhat in fashion at the time, but still, it’s just confusing. From what I can tell, its a loose pair of short, black capri pants under a black skirt with red piping. My question is, was this a common occurrence? Are these items meant to be together, or was this a Birds of Prey special? 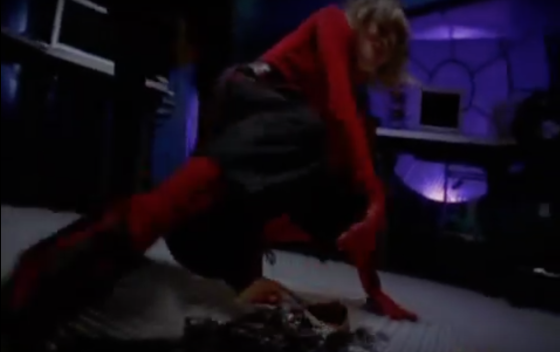 NO CLUE what is happening here? Appears to be some kind of heeled boot with the black/red accents thing going on and red socks. Are these a real shoe? I mean, it seems most likely that the crew would have bought off the rack, but I have never once seen a shoe like this anywhere in the real world. Just another part of the mystery. So there it is. Kind of embarrassing that after 12 years, I still have no idea what this costume is, but that’s my cross to bare. Most likely scenerio here is that, for the final episode of this short-lived show, the costumers didn’t have any real time to make a comic-accurate Harley costume, and instead customized a red top and then got the rest off the rack, but I don’t know for sure.  Of course, I’ve tried contacting some of the wardrobe department from the series, but was never able to get an interview, so the mystery lives on. Such a strange thing to be posting about, but its one of those things that happens when you are obsessed with a show that came and went for so many others. Sometimes, you just have to be the crazy. 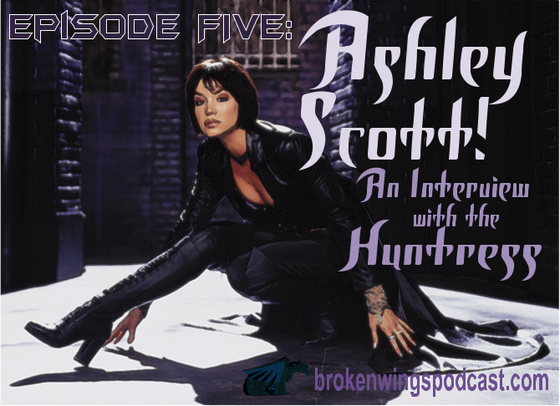 Broken Wings is back with a one-on-one interview with Birds of Prey star Ashley Scott! Ashley has had an amazing career, from her beginnings as a model to roles in A.I.: Artificial Intelligence, Into the Blue, Jericho and the Lifetime hit Unreal. But she will always be best known on Broken Wings by the name Huntress. Host Matt Truex talks in depth with Ashley about her start as a model, her career change to acting, and every step of her Birds of Prey experience. Follow Ashley on her website ashleyscott.com or on Twitter @IamAshleyScott. Follow Matt @MatTruex and @Brokenwingspod. Be sure to check out more Birds of Prey news and articles at brokenwingspodcast.com. 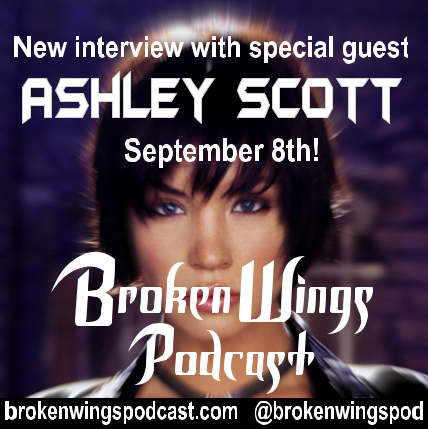 The word is out.  Broken Wings: The Unofficial Birds of Prey Commentary Podcast returns September 8th with a very special interview with the Huntress herself, Ashley Scott! There are no words for how excited I was to talk with Ashley and to get this interview out to her fans. Check back Tuesday, September 8th for the new podcast and subscribe to Broken Wings on iTunes. Fans of Ashley Scott should also check out ashleyscott.com and follow Ashley on Twitter, @IAmAshleyScott. 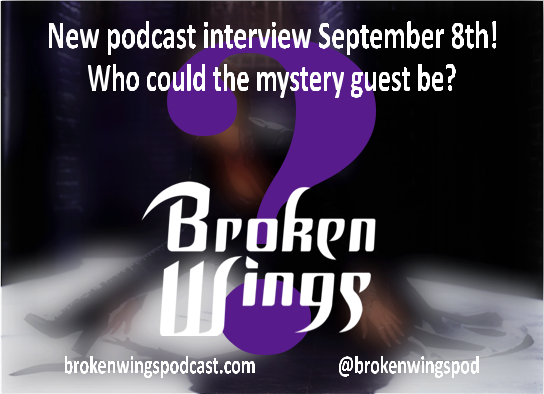 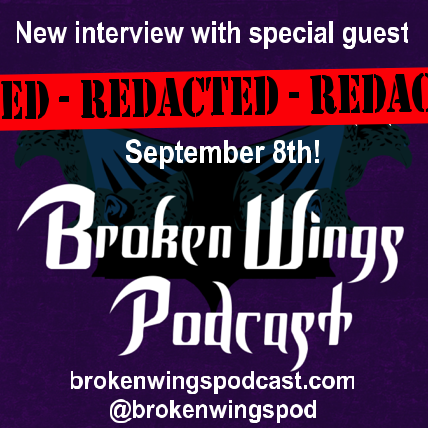 My Tweets
Blog at WordPress.com.